Today mobile apps enjoy unprecedented levels of audience reach. This has been facilitated by the drop in the cost of cellular technology and the ramping up of smartphone performance. Today’s smartphone offers seamless internet connectivity, allowing users like you and us to literally have the world at our fingertips.

We are addicted to our phones has spurred app development initiatives across enterprise sectors. The intention could be branding, advertising, marketing, or even offering their services through a mobile app.

In the past, enterprises either needed to choose between Android and iOS to build their app or create separate versions for each OS. Cross-platform app development then stepped in to save the day.

Flutter is a fully-equipped cross-platform toolkit built by Google that Developers love to use. Some of its pros are-

React-Native has its own pros, allowing it to hold its own against its newest competitor, Flutter.

Unfortunately, React Native does have a few cons. When it comes to custom, platform-specific modules, you might need to hire a Native developer to bridge gaps. React Native development isn’t always smooth, as the framework frequently faces device compatibility issues and faulty case execution. Also, React Native is not the right choice for games and other applications that demand complex animations.

Now that we have covered Flutter and React Native’s capabilities and use cases, it’s time for the verdict. We now have a clear answer to the question: Flutter or React Native is better, and our verdict is Flutter.

Even though both frameworks can deliver great cross-platform applications, Flutter app development services take the lead, given Flutter’s speed, shallow learning curve, cost efficiency, community support, and performance levels. With the right Flutter app development company, you can rest assured that your enterprise app will be a winner.

React-Native is a feature-rich framework that can stand shoulder-to-shoulder with today’s best frameworks. Still, the simple fact that Flutter can create charming applications that offer superior levels of performance and client experience gives it a competitive advantage over React Native.

Now all you need to do to get started on your app development initiative is hire Flutter developers. We trust that this article will prove informative. Until next time, happy developing! 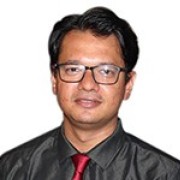 I am Pratik Mistry, a rare mix of technologist and vice president in sales at Radixweb. My passion lies is in helping companies to grow revenues by delivering top notch custom software development solutions and build value-based partnerships. When not driving high-impact go to market strategies, I love to try new cuisines and going to the movies.

Why You Should Use A Dashboard Management System?

How Much Does It Cost to Develop an API?